"Everyone has a beautiful voice and can learn how to sing!"

"Singing is a full body activity"

"It is a gift for yourself and the world to work on self-expression, the voice is your given instrument. Use it!"

“Soprano Esther von Schoenberg makes a believable portrait of the often misunderstood Amahl with a flexible and expressive soprano voice,”

"I have a passion for singing, but I also doubt my own capability. With equal parts professionalism and empathy, Esther works with the big picture - she fuels my desire to learn and helps me combat my self doubt."

I sung my first opera role when I was 10 years old in the children’s opera Brundibar, it made a lasting impression on me. During high school I combined violin and singing studies. My Russian violin teacher had a big influence on my further music studies with his passionate and organized teaching.

After finishing a Bachelor degree in Humanism (Physchology & Philosophy) I decided it was singing I wanted to do and started studying voice and voice pedagogy with Riekje Bakker at the ArtEZ Conservatory in Zwolle the Netherlands.

After receiving my bachelor diploma in 2011 I continued with the Master of Music program where I studied classical voice with Marjan Kuiper. I focused on opera performance and organizing my own projects trying new things: like singing with Ghetto blasters, combining Romanian and newly written classical music and creating new concepts for performances. I received my masters degree in 2013.

Mostly I perform as a soloist in oratorio and cantatas.

Baroque music takes a big chunk of my repertoire and I truly enjoy singing it. I also have an affection for intimate song repertoire and I’m not afraid to try out newly written compositions. Since 2020 I am the new choir leader of the Umeå Barockkör. Also a wonderful way of making music.

Teaching and organizing became something I really enjoy. To be able to share what I've learned is a privileged and a school in itself.

Voices are completely intertwined with who we are and with how we express ourselves.

Singing is a full body activity. Voice, body and mind.

I teach classical singing technique with a relative simplicity and with the systematical development in mind that you can find in physical training.

I encourage my students to become independent, spark curiosity and teach learning with compassion for the process.

The goal is free expression in the music you love! In every lesson or workshop there is time for music making and artistry. 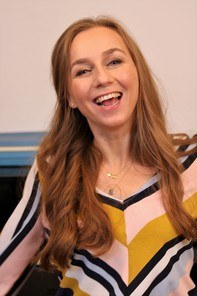 An optimal posture and basic fitness and flexibility are the basis for a well functioning body. It creates the possibility to take a full breath, to relax the shoulders, neck and jaw and is the foundation for our well-being. In studying singing everything becomes easier when the physical possibility to sing without unnecessary tensions is already present.

After giving birth to my second daughter I suffered from severe pelvic floor instability. This not only had a tremendous effect on the connection to my body, but also on my voice. I reconnected with my body and my voice by a long journey of regular physical training.

I started to re-think vocal training from the point of view of sport science. Like any other athlete singers use their bodies in a specific way, therefore physical training for singers should be a part of effective vocal training. Together with Umeå University in Sweden and physiotherapists Björn & Ulrika Aasa I am starting a research project about physical and breathing exercises for singers.

Singing and physical training have the possibility to heal the brain. The programs in the app Vocalise could benefit people that have suffered severe brain injury and we are looking to collaborate with the regional brain association Hjärnkraft.

As an entrepreneur and CEO of EVONS Creative Voice Solutions AB I develop the holistic voice training app Vocalise. The courses in Vocalise combine vocal and physical training specially designed for singers.

EVONS Creative Voice Solutions AB will be part of the business incubator BIC Factory from January 2021, works together with THNX Innovation, Umeå University and is supported by funding from the European Union, Region Västerbotten & Almi.